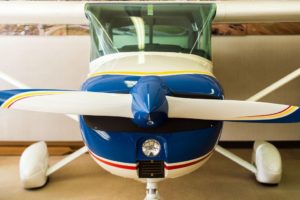 An exhibition area on the first floor south annex of Discovery Station is home to the Hagerstown Aviation Exhibit and is included in museum admission.

Explore a collection of artifacts, memorabilia, and displays depicting the aviation heritage of the Hagerstown area, which for 70 years was one of the nation’s leading centers of aircraft manufacturing. Pioneers in the design, testing, and manufacturing of well-known aircraft plied their trade here.

Exhibits include equipment and electronics displays, an experimental Papoose airplane built in Washington County, and a hands-on, child-friendly, interactive Cessna 150 with full instrumentation and indicators. Museum visitors can sit in the cockpit and take turns working the controls.

A 1/5 scale replica of the famous PT-19 trainer is on permanent display courtesy of the late Jack Garrott, who piloted a PT-19 during WWII and constructed the flyable model now exhibited at Discovery Station. During World War II, over ten thousand people worked on the production of the aircraft in Hagerstown. More than 8,000 PT-19 trainers and specialized versions of the aircraft were built by Fairchild Aircraft and its subcontractors. The PT-19 played a vital role in the United States and its allies gaining air superiority and victory over enemy forces in World War II. Tens of thousands of allied airmen received flight training in PT-19s, more than in any other military trainer.

This documentary film, shown on PBS prime time television, presents the unique and previously untold story of Hagerstown’s aviation history. It features never-before-released images and rare local film footage of interest to young and old alike. See it for the first time, or see it again, at the Hagerstown Aviation Exhibit at Discovery Station, included with museum admission. The DVD is available for purchase at the museum’s Treasure Gift Shoppe.